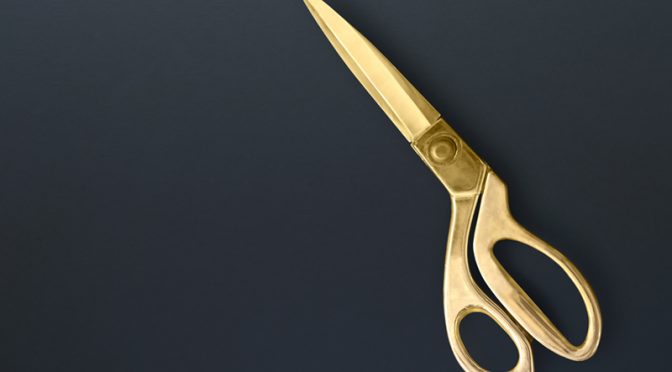 Have you ever needed a pair of scissors and couldn’t find one? No doubt you were extremely frustrated. Although scissors are one of mankind’s most low-tech inventions (two strips of metal joined at a pivot point), their uses are manifold and there seems to be no substitute. Imagine trying to cut a piece of paper without a pair of scissors, cutting out an article from a newspaper or magazine without scissors, opening a package tied up with string without scissors, etc.

Given their basic simplicity and wide range of uses, I believe scissors unquestionably merit a premier place on the list of what I like to call “extraordinary ordinary things.”

You may have noticed I have been somewhat loose with the words I have been using to describe this amazingly simple instrument. This is because it is generally viewed from two perspectives, which are interchangeable.

First, the word “scissors” when used alone is always plural. Grammatically, you shouldn’t talk about “a” scissors, but only scissors. For example, the scissors are (plural) on the table. However, you can also say the pair of scissors is (singular) on the table. This is very similar to the way we talk about trousers, i.e. there is a pair of trousers on the hanger or there are trousers on the hanger. But this is a whole different discussion.

Since scissors are fundamentally so simple and useful, you might be tempted to guess that they were invented a very long time ago. And you would be right.

The earliest known scissors appeared in Mesopotamia (in the region of the Tigris and Euphrates rivers) 3,000-4,000 years ago. However, they weren’t like most versions of modern scissors. Instead of being fixed by a pivot, they consisted of bronze blades and handles held together by a thin, flexible curved bronze strip or spring. This spring served to hold the blades in alignment, allowing them to be squeezed together for cutting, and then pulled apart when released.

This basic design endured into the Middle Ages and the Renaissance. The basic manufacturing procedure consisted of two stages.

Pivot scissors, which eventually replaced spring scissors for most uses, were invented by the Romans around 100 CE. The design quickly spread other areas of the world, including China, Japan, and Korea.

For many centuries, pivot scissors were made largely piece-by-piece by individual artisans. In 1761, Robert Hinchliffe of Sheffield (Great Britain) developed pivot scissors made of hardened and polished cast iron. Initially, the process for making these scissors efficient and comfortable for the user was laborious and slow. A major challenge for the scissors-maker was to form the bows, i.e. the holes at the squeezing end where users put their fingers and thumb. However, over time Hinchliffe solved this and other technical problems so that the instrument could be commercially made in increasing quantities.

Subsequently, scissors designed for specialized purposes combined both the pivot and spring mechanisms as well as adding additional mechanisms to increase accuracy, ease of handling, and to multiple the cutting force created by squeezing the bows (handles) together.

People who are concerned about such things generally put scissors and shears into a number of descriptive categories. But before looking at them, you would have probably noticed that I’ve just introduced a new word: “shears.” What is the difference between scissors and shears? Not much. For the most part, scissors are smaller with cutting blades no longer than 6 inches (about 13 centimeters). Scissors are used for more delicate work (being smaller) and shears for rougher work (being larger). However, the fundamental design is the same, so it’s basically a question of usage. You might say shears are a subset of scissors, i.e. all shears are scissors, but not all scissors are shears.

Scissors and shears are usually put into the following categories.

Sewing and couture (clothes-making). Dressmaker shears for general use; small sharp scissors for quilting; pinking shears to prevent certain fabrics from fraying; lightweight sheers to relieve strain on the hands near the end of a project; and spring-mounted shears, also for tired hands but especially useful for clothes-makers with arthritis because the spring action makes them significantly easier to open and close

And who can forget those giant ceremonial scissors so prized by politicians and other notables for cutting the ribbon to inaugurate a new factory, unveil a new monument, open a new supermarket, inaugurate a trade show, etc.

Not at all. Although the basic design is the same, i.e. bows, pivot, cutting blades, for right-handers and left-handers are mirror images, there are significant differences. Specifically, the bows (holes in the handles for fingers and thumbs) are reversed for better left-hand grip. Likewise, the blades are reversed for surer, steadier cutting.

There are also a couple of less obvious reasons for left-handed scissors. Because of the awkward grip, extensive use of right-handed scissors (such as in the clothes-making industry) can result in painfully tired fingers, and even callouses. Moreover, to make a good, clean cut of cloth, the user needs to clearly see the cutting line, i.e. the trace of where the cut should be made. When a left-hander uses a right-hand scissors, this view is partially blocked; however, with a left-handed scissors it is open and clear.

It’s not surprising that because they are such elegant, simple, and useful tools, the word scissors have entered the general language. Here are a few examples.

A type of airial combat manœuvre

A type of ancient Roman gladiator

A leg movement used in swimming in the sidestroke where the legs are opened and closed in a scissor-like motion to help propel the swimmer forward.

A type of automatic door

In chemistry, a type of motion relevant to chemical bonds

A configuration of railroad tracks

A method used in the sport of high jumping

Restriction enzymes used in biotechnology to alter DNA sequences and modify gene function. They are called molecular scissors because these enzymes cut DNA at or near specific recognition sequences known as restriction sites.

A game usually played between two people who use their hands to symbolize a rock (closed fist), paper (flat hand), and scissors (fist with the index and middle finger extended). On the count of 1-2-3, the players simultaneously reveal their choices. Rock beats (crushes) scissors; paper beats (covers) rock; and scissors beats (cuts) paper. If the players both show the same hand, it is a draw.

A critically acclaimed 1990 fantasy film (starring Johnny Depp in the title role) about young man who has scissor blades instead of hands.

The word scissors have taken on a special meaning in the world of computing. Basically, scissors is a computer tool that allows you to cut out desired portions of a window or desktop and save it to be pasted in elsewhere.

Microsoft has been offering some form of this software, which is it calls Snipping Tool, ever since introduction of Windows Vista in 2006.

There are also independent suppliers of scissors tools, such as Desktop Scissors, whose software can be downloaded to your computer. According to the suppliers description, the Desktop Scissors allows the user to take snapshots of selected areas of the screen, then immediately draw in the selected area, e.g. to highlight something, insert arrows, fill in the areas you don’t want to show, make notes, work in the background, etc.

While I was writing this blog, Peter Denning, editor of Ubiquity, brought to my attention computer scientist Larry Tesler recently died (1945-2020). Certain obituaries focused on his implementation of a “cut and paste” function of early word processors ca 1975. Cut and paste is a scissors-like process whereby a piece of text can be selected, copied or cut out, and re-inserted elsewhere.

Cut and paste got its name from a practice used when text was produced on typewriters. To rearrange the flow of a document, writers and editors would literally cut out a piece of text and paste it in elsewhere to see how it would look. The same technique was used to insert text from another document.

Cut and paste was already a well-established practice when Larry Tesler got the idea of making it part of the first WYSIWYG editor, Gypsy. Achieving Gypsy was a far more significant accomplishment than integrating a common editing practice into the software. Denning said, “Tesler was a gifted designer who contributed to a number of significant projects that shaped computer science. Not only did he produce the first WYSIWYG editor, he contributed to SMALLTALK, SMALLTALK Code Browser, Xerox Note Taker, Object Pascal, Apple Lisa, Apple Newton, Stageclass Creator, and Mode-less command structures.

“I am saddened by the emphasis on a relatively trivial aspect of text editors. Larry deserves so much more credit than this.”