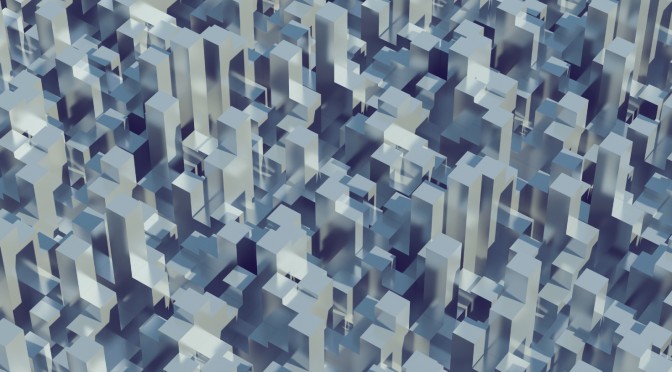 Silicon Valley, and the high‐tech industry in general, promotes itself as the inventor of the future, pushing aside old businesses and disrupting lifestyles in the name of progress. But I don’t think so. Actually, high‐tech is caught in a repeating self-similar fractal, where the gadgets may be new, but the business methods and processes are as old as the Industrial Revolution itself. Recall that a thing is considered a fractal if its structure forms a repeating pattern at different scales [1]. The ups and downs of the S&P 500 stock index form a fractal, because the pattern of peaks and valleys are similar when viewed annually as when viewed daily. Hence, annual prices are similar to daily prices, but at a different scale.

Take cloud computing as an obvious example. Back in the day when IBM was the dominant information technology company, hardware was much more expensive, relatively, than telephone service. Hence, the predominant computing model was a central mainframe with a lot of terminals connected via a telephone line. The Carterfone decision in 1968 permitted computers to connect to each other through an ordinary voice phone [2]. This made it economically advantageous to share expensive hardware with hundreds of users.

But then the cost of computing hardware fell dramatically with the mass production of the microprocessor and personal computer, while communication costs remained relatively high. So guess what? The personal computing era favored distributed computing over timesharing. Between 1975 and 1995, most computing was done on a desktop or workstation connected by a local area network. The idea of sharing expensive hardware made no sense at all when a desktop machine was capable and the operator (you) didn’t have to wait.

When the Internet took off after being commercialized by the U.S. Department of Commerce, the economics of communication versus calculation changed once again.

Not only did Metcalf’s Law kick in but also a dramatic plunge in the cost of multi-core servers made mainframe computing economically attractive once again. Combine this with inexpensive handheld “terminals” (the smart phone), and the tech industry completed the 360-degree pattern of self-similarity. Mainframes (cloud servers) are back in favor, again.

The same self-similarity pattern can be seen in software, too: Programming language R is self-similar to the original vector language APL; Java is similar to the UCSD P-code system and interpretive BASIC before it; and AI practitioners re-discover Bayesian probability and Pavlov’s reinforcement learning about every decade. Admittedly, successive generations of programming languages are more powerful—metadata languages like XML and HTML5 have elevated the level of programming —an innovative step sure to start a round of new self-similarity patterns.

Over the past two decades the so-called “Internet business models” have also repeated self-similarity patterns. In the late 1990s Silicon Valley re‐invented the “blade and razor‐blades” business model whereby a service is given away for free to attract customers to a premium or cash‐and-carry model. Most of these businesses became victims of Schumpeter’s creative destruction, but some succeeded by converting to the proven TV advertising model, e.g. WebVan failed, but Google succeeded.

During the first decade of the Internet Revolution, high-tech entrepreneurs employed a self-similarity pattern of disintermediation to build their new companies. But disintermediation is an age-old idea of optimizing the performance of a value chain by eliminating or displacing intermediaries. Eastman Kodak once owned cows so the vertically integrated company could manufacture its own glue. More recently, warehouse retailers like Costco knock out the middleman by becoming the retail outlet as well as the warehouse. EBay and Amazon simply moved the warehouse online.

Currently, disruption is a self‐similarity pattern is favored by high-tech. But, disruption through technology is a far older idea than suggested in Clayton Christensen’s Innovator’s Dilemma [3]. Uber, Lyft, Airbnb, and other “sharing economy” startups repeated the railroad and automobile industry models that disrupted transportation more than 100 years ago. And the new content/service providers like Hulu and Netflix are repeating the pattern established by the old standard—TV disrupting Hollywood and the movies. If mailing a DVD through the mail cost as much as mailing a bulky VHS tape, Netflix would not exist today. Technology banished Blockbuster, but not the business model.

Is there nothing new under the sun? Whenever a new technology drives out cost at the expense of an incumbent technology, entrepreneurs are waiting to step in and exploit the advantage. For the most part, they apply a well-known technique rather than something truly new because it is proven. But because humans love new and glittery technology, not to mention the rise of a new billionaire, consumers are constantly convinced the future is new.

Speculations on what might initiate future self‐similarity and repeating patterns are: Disruption of cable TV by broadband wireless Internet; a return to “fat client” computing using handheld supercomputers with fast connectivity to exo‐scale databases; the flipping of education whereby lectures are delivered to your home, but small distributed study groups meet in face‐to‐face format just like contemporary classes; domestic robots that disrupt the service industry and some husbands; and business meeting telepresence services that banish office buildings and eliminate commutes ,but re-invent personal contact (rather than the relatively impersonal such as LinkedIn and Facebook).

The trick is to surf the waves of these self-similarity or fractal patterns of technology innovation. When one wave dies off, the next generation of the technology is sure to follow a similar wave. Futurists, researchers, and entrepreneurs who know this can often find answers to technical problems in the previous generations. Not exactly the same, but similar enough to get a leg up on the competition.