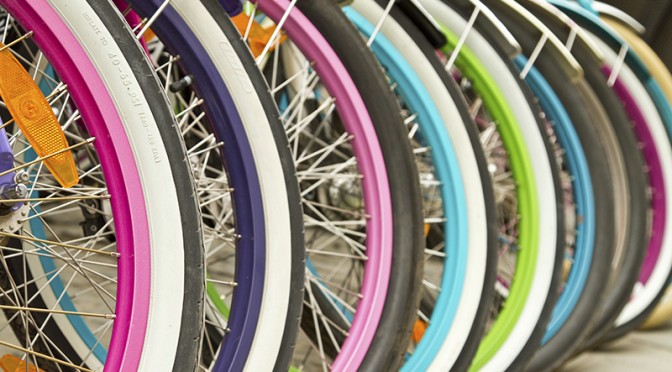 A recent, popular Internet video of Destin Sandlin  riding a bike with reverse steering led me to reflect on our tendency to equate knowledge with things that computers do. If we could formulate a “science of learning,” we would be able to design algorithms that help people learn faster and much more reliably. As Destin struggles to understand why he cannot ride the bike, he reveals how our common sense is blind to embodied knowledge.

Please take the next seven minutes to view Destin’s story.

In a nutshell, this is Destin’s story: He is an expert bicycle rider. His welder friends give him a bike with a gear on the handle bar, which turns the wheel in the opposite direction of the handlebar. To his great surprise, he is unable to ride it. No one else can ride it either. He spends eight months of daily practice until finally he “gets” how to find his balance. He then discovers he can no longer ride a normal bike, but he recovers that knowledge in 15 minutes. He is astounded and baffled by his inability to learn the new bike, the apparent unlearning of the old bike, and the abrupt “brain switches” between the two riding skills. He concludes “knowledge ≠ understanding,” meaning the knowledge of how to ride bikes does not give him the understanding of the new bike.   He also realizes his brain is much less “plastic” than his young son’s, who took only two weeks to figure out how to ride the reverse steering bike.

In Destin’s story, the brain accumulates knowledge and organizes it into an algorithm that controls how he moves. But he concluded this story does not inform him why none of his biking knowledge helped him learn the new bike, why he seemed to lose his old biking knowledge, and why he could not ride a normal bike after his brain “switched.”

The problem is the idea of knowledge, which we get from our understanding of science. A science develops around a recurrent phenomenon when we want to understand it, predict it, and control it. In science we use the metaphor “body of knowledge” (BOK) to represent everything we have learned as an organized, structured, ready-to-use database of facts, models, laws, procedures, algorithms, explanations, and descriptions.   Knowledge functions as “information” that accumulates in the BOK. We put knowledge to use by absorbing it into our brains and then take action to “apply” it to situations in the world. When we get good at something, our brain has made the knowledge into a subroutine that it fires off to execute in the background and then continues with its conscious thinking.

The simplest and most potent criticism of this story about knowledge is that the BOK consists of descriptions only (“know what”), but the ability to act skillfully (“know how”) is not part of the BOK.   Put another way, talking about something is fundamentally different from doing something.

Know-how refers to practices (ways of doing things) that we have trained into our bodies, where they become so deeply ingrained that we can perform them skillfully without even being aware of the practice. Know-how is often called embodied knowledge because it inhabits our whole body (not just the brain), where it is encoded as electrical, structural, and chemical patterns. Terms like “muscle memory” point to how muscles can move on their own without waiting for the brain to tell them exactly what to do.

The philosopher Hubert Dreyfus is famous for characterizing know-how as a series of levels beginner, advanced beginner, competent, proficient, expert, and master [1]. The actions of the beginner can be described as “rule-following.” The advanced beginner adds maxims, rules that guide rule-following in familiar situations. The competent person does not consciously follow rules except when figuring out how to deal with an unfamiliar situation. The higher levels (proficient, expert, master) reflect increasing levels of embodiment of the skill so that you are so completely unaware of how you do something, even when asked you cannot say. Dreyfus argued machines, which by nature follow rules, cannot exhibit expert behavior because no expert can tell what the rules are if they exist at all. In other words, the fully embodied levels (proficient, expert, master) cannot be described and then inscribed into a machine that could imitate them.   Dreyfus also argued the embodiment is so deep that machine learning—machines adapting themselves though feedback loops—cannot lead to expert behavior.

Bike riding is a quintessential example of an embodied skill. Most of us are proficient at it. The descriptive knowledge about biking is limited and straightforward: It defines bicycles, pedals, chains, gears, handlebars, forks, tires, spokes, turn signals, bike lanes, balance, good behavior in traffic, and steering by leaning. None of this helps us learn to balance, judge speed, sense when tires are losing their grip, read traffic patterns, know what pressure to exert on the brakes to avoid skidding, or navigate to a destination.   We learned bike riding by engaging in a lot of riding practice and we progressed through skill levels including beginner, advanced beginner, competent, until proficient. We did not learn it alone but rather with family and friends who held the bike and gave us advice and tips, and also with expert mentors and coaches who helped us develop sensibilities about fine points that make big differences in performance.

Developing sensibilities is an important aspect of embodiment. Sensibilities are interconnected with our emotions and feelings. For example, balance on a bike is a critical sensibility; moreover, we experience pleasure when we ride effortlessly and fear when we feel we are losing our balance. There are no rules describing sensibilities; there is no “sensibility algorithm” in our brains.

Destin’s experiments revealed the depth of his embodiment of bike riding. What he called his knowledge—algorithms in his brain—was not how he “knew” biking. His knowledge-based hypothesis that he could ride the new bike simply by understanding its mechanics and consciously modifying his actions failed completely. His transition from beginner to advanced beginner—manifested when he finally learned to keep his balance on the new bike—came only after considerable practice. His impression that the old skill was lost was wrong; it was suppressed but the embodied patterns were still in him and quickly manifested when he returned to the old bike. In other fields we see proficient people who can easily switch their performance among several variations, for example, musicians who play multiple instruments or athletes who play multiple sports. With more practice, Destin could learn to ride both kinds of bike without thinking about it.

Our stories of science focus on knowledge but not embodiment. In pursuit of scientific understanding, we forget we need to become skilled performers and our reputations and identities depend on our level of know-how far more than our know-what. Our best scientists deeply embody skills that give them the sensibilities know-how to ask the right questions and to choose lines of inquiry that lead to new results.

Thank you, Destin, for showing us something about knowledge and pointing us in the direction of understanding embodiment.