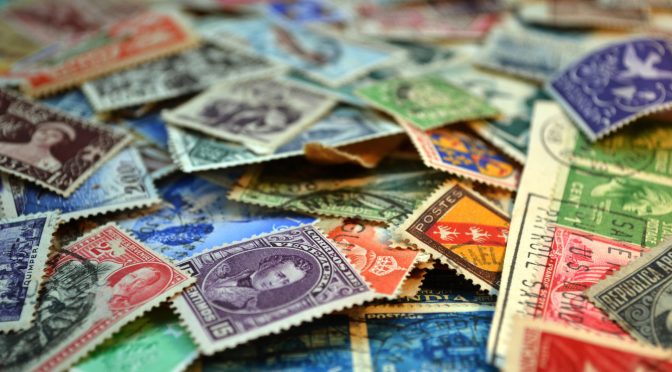 “Please Mr. Postman” (The Marvelettes) and “Return to Sender” (Elvis Presley) were two major pop hits of the 1960s. Among many others songs, they tell the story of young lovers desperately trying to communicate with the object of their affection via hand-written and posted letters.

Wooing and winning one’s teenage heartthrob through hand-written letters! To many of the modern generation, this must seem like a quaint, and perhaps even crazy idea. With email, SMS, social media, and other electronic revolutions in communication, no one would rely on “snail mail” to achieve such an important purpose.

What Is an Adhesive Postal Stamp?

I have insisted on the term “adhesive postage stamp,” which today is simply called a postage stamp or a stamp, to distinguish it from the various kinds of postage stamps that preceded it.

Public postal services existed in many countries long before the pre-printed adhesive postage stamp. However, they were cumbersome and tedious affairs because each letter was treated individually. If you wanted to mail a letter, you had to go to the post office (or the pre-19th century equivalent), have the letter measured (charges were often based on size, not weight), have the charge calculated, and then pay the charge on the spot. As proof of payment, the postal service clerk would sign the envelope or affix some kind of official seal. You couldn’t just stick on a pre-purchased adhesive stamp on to the letter and then pop it into a local mailbox.

Some public postal systems were even more onerous. They required the recipient, not the sender, to pay the postage on delivery, which was charged by the number of sheets and/or distance the letter had traveled.

In short, the pre-printed adhesive postage stamp created a revolution in written communication, making sending a letter an everyday occurrence rather than a major event.

The idea for pre-printed adhesive postage stamps bought and affixed by the sender was developed in 1837 by Rowland Hill, a former school teacher and respected educator in Great Britain. He also created the concept of uniform postage rates based on weight rather than size. Both concepts became reality in 1840. In 1860, Rowland Hill was knighted by Queen Victoria for his extremely practical idea.

The first pre-printed adhesive postage stamp ever issued, designed by Hill, was the British Penny Black. Making its appearance on May 6, 1840, it carried an engraved profile of Queen Victoria’s head, which adorned all British stamps for the next 60 years. It is still traditional in Britain for the monarch’s portrait to adorn postage stamps.

An early entry of computers into the world of written communication came in the 1970s with the commercial introduction of the facsimile transmission machine. This machine (commonly called by its simple one-world nomenclature, “fax”) allows written communication to be electronically scanned in one location, and then transmitted to another location hundreds and even thousands of kilometers away via telephone.

In the early 1970s, I was working for a company in Los Angeles that had acquired one of the first fax machines. Or at least I thought it was one of the first fax machines. However, I later discovered the fax had been invented more than a century earlier. No, it didn’t have digital displays and printouts, but it was able to create facsimiles at distance.

This device, invented by Scots clockmaker Alexander Bain in 1843, sent images across telegraph lines. It comprised a pen attached to a pendulum kept in motion by electromagnetic impulses. The image at the receiving station was reproduced on electrochemically sensitive paper.

Although a laboratory success, the quality of reproduced images was too poor for the invention to become a commercial success. The first commercially exploitable fax machine was known as the pantelegraph. Invented by Italian physicist Giovanni Caselli, it went into service between Paris and Lyon in France in 1861.

Despite significant improvements, including the ability to transmit over telephone lines, modern fax machines, those of the 1970s, had difficulty becoming accepted because they were expensive to buy and rather unreliable. Most of all they were slow (about three minutes per page) and therefore expensive for general use because of high telephone charges.

In the very early 1970s, some entrepreneurs in California saw these problems not as an impediment but as an opportunity. To exploit it, they created Faxmail, a network of offices across the U.S. where people could go to send and receive faxes or have them delivered, very much like a telegram. Unfortunately, the venture was premature. Although it alleviated businesses of the burden of buying a fax machine for only very occasional use, the cost of sending faxes via this commercial service seemed prohibitive except for unavoidable emergencies. The company failed.

Faster, less-expensive fax machines began seriously populating business offices in the mid-1970s and did yeoman duty for the next couple of decades, until about the end of the 1990s. Today they are approaching obsolescence, having been supplanted by email.

Nevertheless, fax machines still retain some advantages. They are particularly useful for transmitting sensitive material. The same material that could be intercepted without need for telephone tapping if it’s sent unencrypted over the internet. Moreover, in some countries, electronic signatures on contracts are not recognized by law while signatures on faxed contracts are recognized, making such documents legally binding.

To maintain these advantages, larger business organizations have combined fax and email. A document in one location is faxed to a central server in another, which then routes it in the form of an internally secured email to all designated recipients. Such systems cut costs by eliminating unnecessary printouts and by reducing the number of telephone lines needed to handle traditional faxed documents.

Such hybrid systems may now also be on the way out due to the next major leap in written communication, which in fact finds its origin in ancient times: The development and increasing acceptance of digital signatures.

Millennia before public postal systems developed, the only people who sent written messages great distances from one place to another were rulers (emperors, empresses, kings, and queens) and the nobility. However, the problem was not transporting the document because rulers and nobles had servants to do that for them, or they could hire couriers. The problem was authenticating the document, i.e. ensuring it really came from the person the courier said it did. Imagine a soldier receiving an order from a high-level officer with no way of ensuring it was genuine or a fake. Imagine a land manager receiving an order from the landowner with no way of ensuring it was genuine. They couldn’t  take the word of the courier. A person whom they probably didn’t know and therefore had no reason to trust.

The solution was seals and stamps. These were recognized identification marks affixed to the document by the sender to assure the recipient that the document was genuine.

Technically, seals and stamps are not equivalent terms. In general, a seal is an identification symbol embossed into a support, such as wax, and then affixed to the document; it is also three-dimensional. A stamp is an identification symbol embossed (stamped) onto the document in ink; it is flat. Either way, the purpose was the same, to help ensure the authenticity of a document.

Today, with email, increasing numbers of documents are digital; they become physical only if someone for some reason wants to print it. Physical or not, the problem of authentication remains. The recipient  must be assured that what arrives in their inbox is from the putative sender and means what it says.

This is where the digital signature comes in, the modern equivalent of the ancient stamp or seal.

The idea of a digital signature became a reality around 1975. It moved into email within a few years (notably via PGP, “pretty good privacy”) and is common in email systems as an option when users want authenticated communications. Assured authentication is particular important when e-mailing a contract, a deed, a birth certificate, and other legally binding documents.

A digital signature may be especially useful when the same document is sent to a large list of recipients. For example, today it is common practice for a university lecturer to email important information to students. Suppose the students receive an email stating the exam date has been changed. If this were a hoax, many students simply wouldn’t show up and miss the exam, which would exasperate the lecturer, exasperate the students, and cause chaos throughout the school.

The digital signature is part of the HTTPS protocol used in virtually every e-commerce transactions. These digital signatures are hidden and thus undervalued by the general public. Perhaps even more so than pre-printed adhesive postage stamps, which are in plain sight.

As opined by one astute computer sciences observer: “I believe in the long run the commercial and social impact of the digital signature could be more profound and more far-reaching than the humble postage stamp we take so much for granted.”

I had a very insightful experience with the early fax machine because it provided a concrete example of the dictum “familiarity breeds contempt.” In this case, it wasn’t so much contempt that was bred, but indifference.

As I mentioned, in the early 1970s I worked for a company that had acquired one of the first commercial fax machines. One day we had some important visitors and I was elected to show them around. When we passed the fax machine, I asked, “Do you know what that is?” None of them did, so I explained: “You can put a page of text into this machine here, dial up our office in New York, and three minutes later an exact duplicate of the text will be printed out at the other end.”

The visitors’ jaws dropped. “Transmit a page of text 6,000 kilometers across the continent in three minutes! That’s amazing!”

“I don’t know why you are so impressed by this machine,” I replied. “You all have a much more sophisticated machine in every one of your homes. It not only receives text, it receives pictures, in color, that move, and with sound. It’s called a television. In reality, the technology of this fax machine is like a LEGO set compared to a real building.”

As a powerful reminder of just how far we have come since introduction of the pre-printed adhesive postage stamp (largely due to computing and computer technology), here is the transcript of a December 2018 monologue by comedian and late-night TV host James Corden.

You know, former President George H.W. Bush was laid to rest today at the age of 94. In his honor, the stock market was closed today and the postal service suspended all mail deliveries. So no mail today.