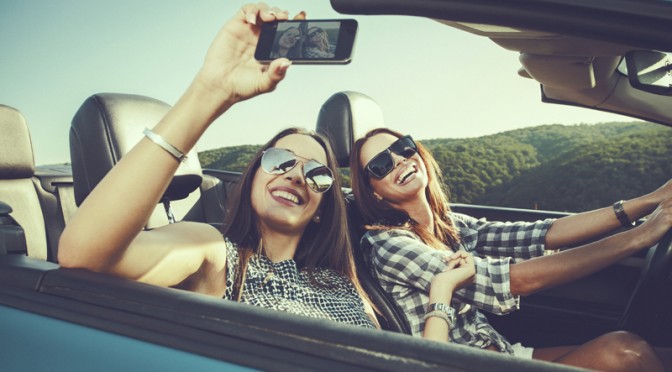 Niall McCarthy of Statista.com uses data from Priceonomics to define a new category of accidental death by smart phone—the “selfie-fatality.” Forty-nine people have died because of selfies over the past three years, exposing some unintended side effects of smartphone usage, according to McCarthy. A 22-year old man in Pakistan was killed as he posed in front of an oncoming train; a Russian woman accidentally pulled the trigger of the gun she was using as a prop; and a man died during a selfie session while concurrently running with the bulls in Spain. India ranked number one in fatalities with Russia second, and the USA coming in third—even though London leads the world in selfies. Most fatalities were due to falling from high places, with drowning coming in a close second. Two people lost their lives because of a grenade; the same score posted by car crashes. Never pose with a grenade.

It is even more widely known that texting while driving can kill you, especially if you are a teenager. “Researchers at Cohen Children’s Medical Center in New Hyde Park estimate more than 3,000 annual teen deaths nationwide from texting and 300,000 injuries. The habit now surpasses the number of teens who drink and drive.” This statistic applies only to the U.S. The global statistic is perhaps 10 times worse. At least among heavy users like teenagers, smartphones can kill you.

Are smartphone deaths and injuries—and the fatal appropriation of smartphone technology for things other than what they were invented for—an illustration of the famous Darwin Award [1], or are cell phones inherently bad for us? People doing stupid things sounds like episodes straight from www.DarwinAwards.com, the web site started by Wendy Northcutt, author of the Darwin Awards book. For example, Iraqi terrorist Khay Rahnajet didn’t put enough postage on a letter bomb, and it came back marked “return to sender.” He opened the package and was blown away. Darwin wins, again.

Arguably, it is partly our fault, but also the fault of technology. All technology has its upsides and downsides. Automobiles take us places ten times faster than horses, but they also cause 33,000 deaths per year in the U.S. The Internet has revolutionized commerce, but it has also opened the door to unsafe surfing. The rapid rise of pervasive smartphone mishaps illustrates the age-old parable of Promethean Fire. This is something we have seen many times before.

Prometheus stole fire from Zeus and gave it to mere humans, and as a result, he was chained to a rock where every day birds of prey ate his liver—a very rough way to go even in mythological Greece. Eventually, Hercules rescued Prometheus, so the story ends on a positive note. But, it was too late. Humans mastered fire and have never looked back. Fire made mere humans as powerful as the gods, just as all major technological advances have made mere humans more powerful than we could have imagined a century ago. The Promethean parable still applies, today.

Clearly, this story is about technology (fire), and its consequences (good and bad). Fire can warm you and cook your food, but it can also destroy you and burn down entire cities. Smartphone technology is Promethean Fire in the same sense—we can benefit from it or be burned by it. With barely one decade of experience with smartphone technology under our belt, it is highly likely that some of us will win the Darwin Award while others will adapt and survive the onslaught.

We have seen Promethean Fire many times before. Over 100 years ago the railroads were both beneficial and destructive. They have since been tamed. More recently, nuclear power has been shown to be both beneficial and dangerous. Power plants warm our homes and light our homes, but they also leak radiation and melt down in the face of tsunamis and mishaps. And then there are the thousands of nuclear weapons being stockpiled. But for the most part, we have tamed the nuclear Promethean Fire.

Apparently, smartphones are getting the best of some people—people who have yet to adapt to addictive texting and snapping self-absorbent selfies. Like any other new technology, it will take us some time to moderate smartphone use, and by the time we do, there will be another technology to challenge our ability to adjust. And for those Homo sapiens who cannot adapt, there is always the Darwin Award. Meanwhile, a few pointers are in order. Obviously, don’t text while driving, and be sure to tether yourself when taking a selfie from the top of a flagpole. And then there is common sense; never photograph yourself while standing in front of a charging train or raging bull.

[1] From Wikipedia: “The Darwin Awards are a tongue-in-cheek honor, originating in Usenet newsgroup discussions circa 1985. They recognize individuals who have supposedly contributed to human evolution by selecting themselves out of the gene pool via death or sterilization by their own actions.”