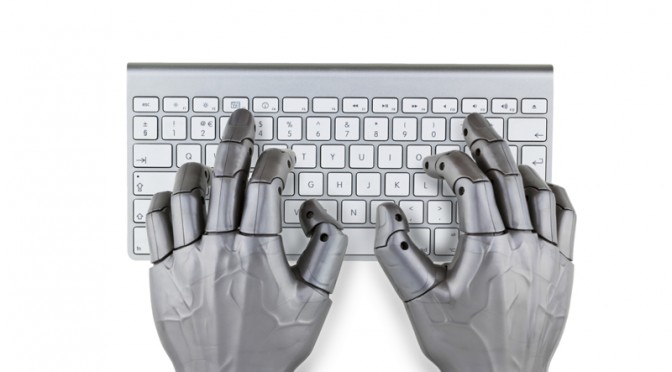 “As industrial robots go from being caged and very expensive (and high-maintenance) to affordable and collaborative, six in 10 manufacturers are expected to begin deploying robotics technology across a wide range of tasks (including assembly and materials handling),” say Daniel Araya and Christopher Sulavik in a recently posted Brookings Institute blog.

For the last year and a half, MIT professors Erik Brynjolfsson and Andrew McAfee have been arguing that impressive advances in computer technology—from improved industrial robotics to automated translation services—are largely behind the sluggish employment growth of the last 10 to 15 years. Since 2000, employment has hit a wall as productivity continues to grow. We are seeing the beginning of a revolution that will displace not only manual labor, but so-called white-collar labor as well.

What happened to the people being replaced by automation? One indicator may be the soaring increase in transfer payments. Transfer payments have more than doubled since 1960—rising from 6 percent of GDP to 15 percent today. When aid or money is provided to an individual who is not required to provide anything in exchange, you have a transfer payment. Social Security and public-assistance benefits are examples of transfer payments, e.g. various forms of unemployment compensation. Regardless of the reason why more people are being paid to do nothing than work is the fact that eventually more people will be idle than working. How will they be sustained?

Even more ominous for workers, the MIT academics foresee dismal prospects for many types of jobs as these powerful new technologies are increasingly adopted not only in manufacturing, clerical, and retail work but in professions such as law, financial services, education, and medicine. More disturbing is the fact that this displacement is happening over a period of time much less than that of a human career. In other words, if you are a millennial, a robot is likely to take your job away before you reach social security age.

Of course automation has been replacing human labor for more than 200 years. Agriculture was one of the first industries to adopt automation on a broad scale, and hardly anyone builds cars by hand anymore. Technology currently exists to go from CAD/CAM system directly to the factory floor with a push of a button, eliminating a large segment of skilled drafters, designers, machinists, and managers in the middle. “More than two-thirds of manufacturers are already adopting 3-D printing technology in some way,” claim Araya and Sulavik.

Everyday things like driving a car, ordering a pizza, and repairing human hearts are rapidly being taken over by machines. As these machines become more connected, they learn faster, eventually outstripping human learning and adaptability. Take the connected car as an example. Patches to correct mistakes made by one driverless car are immediately broadcast to all other car-bots, so they can improve overnight. Mistakes made by robot surgeons of the not-too-distant-future can also be broadcast throughout the medical world to improve surgery everywhere. Robots can learn and improve much faster than humans.

The swiftness of this transformation is part of the problem. In previous “revolutions” change took place over a lifetime. Automation of shoe manufacturing displaced shoemakers, but on a time-scale roughly equal to that of the shoemaker’s career. Today’s “revolutions” take place on a time-scale roughly equal to one-third of a career. Most humans adapt by learning a new skill or going back to school. Nowadays, it is commonplace for a worker to have three or four careers. But, even this is going away, stripping humans of the opportunity to adapt.

A 2013 paper by Carl Benedikt Frey and Michael Osborne, of the University of Oxford, argued jobs are at high risk of being automated in 47 percent of the occupational categories into which work is customarily sorted. That includes accountancy, legal work, technical writing and a lot of other white-collar occupations. Eventually, our number one problem will be the loss of jobs due to automation rather that globalization, at a rate that is not humanly possible to keep pace with, leaving billions of workers without jobs. What do we do, then?

Or, perhaps this is an opportunity rather than a problem.

Verizon paid Bob hundreds of thousands of dollars per year to watch cat videos while Bob outsourced his work to a programmer in China. According to the LA Times, Bob hired a Chinese developer to do his job for $50,000/year, releasing himself from the tiresome duty of programming, “While the [outsourced] developer was working 9-to-5, Bob surfed the Web. At 9, he’d roll in and surf Reddit, watching cat videos. At 11:30 he’d grab some lunch. After lunch it was time for EBay for about an hour, when Bob migrated to Facebook. At 4:30, he’d email management, telling them what he had ‘done’ during the day, and at 5, he’d go home.”

What if Bob owned a robot that could do his work for him, instead of outsourcing to China? Moreover, what if Bob owned a fleet of robots that could deliver goods for Amazon.com, or work on the production line of General Motors? What if Bob owned millions of 3-D printers that produced jewelry upon demand or a fleet of androids that replaced thousands of office workers, or dexterous robots that harvest produce on 100 percent automated farms? What is the value of human labor when a machine can do it better, cheaper, and faster? How will humans earn a living?

Disruption of work begs for an answer to the question: “What is the purpose of work?” Historically, work has been tied to survival, but if machines can provide everything people need for minimal cost, then why work at all? Thus, some economists have developed the BIG idea. BIG stands for Basic Income Guarantee, and means, “all citizens receive an unconditional sum of money either from the government or public institution, in addition to any income received from elsewhere.”

The BIG idea goes back to ancient Greece; in 483BC Athens a rich vein of silver was discovered, there was a debate about what to do with the newfound wealth. Aristides argued for sharing in a form similar to today’s call for wealth redistribution, and Themistocles argued for using the fortuitous discovery to build warships. In a move reminiscent of modern day politics, the silver mine was drained to pay for warships.

One of the founding fathers of the USA, Thomas Paine (1737-1809) advocated BIG in his famous 1797 paper, Agrarian Justice. Paine considered anything in nature to be common property and therefore, should be shared by everyone. Similarly, technological advancement of artificial intelligence and the productivity of robotic laborers might be considered common property to be shared by everyone. More recently, the state of Alaska shares oil tax revenues with every person that has lived in Alaska for more than a year. The Alaska Permanent Fund established in 1976 has paid out more than $53 billion to its citizens. Each Alaskan received $2,072 in 2015. So, BIG isn’t as radical as some might claim.

Clearly, none of this is free. Robots cost money to build and operate. Even if they manufacture themselves, there are costs associated with materials, energy, and distribution. The easiest solution is to tax labor-replacing technology. Bob of Verizon has shown us the way—outsourcing his $250,000/year job to a machine that cost him $50,000/year is not only practical, but smart, too. Assuming Verizon doesn’t object, a machine that produces $250,000 of value and pays $50,000 in taxes may be a sustainable business model for Bob, Verizon, and the government’s transfer payments. But, a human who prefers to watch cat videos all day is an unsolved problem we shall leave for another day.