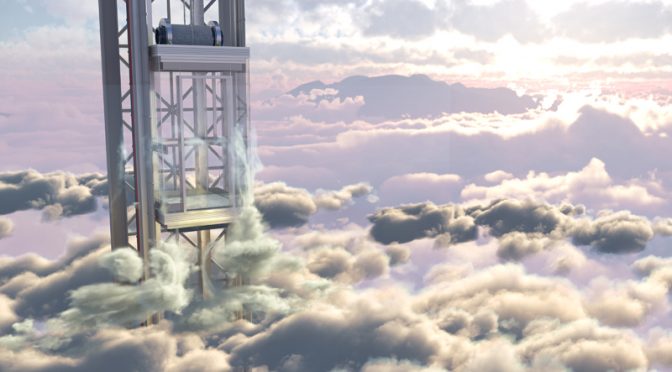 There’s a widely accepted principle about technology adoption. When a new technology is introduced, people are aware of it and   learn how to use it. After a while, people come to embody the practices of using it well and are no longer aware of it. It is just part of our world. We no longer notice how we ever lived without it. Some say this principle is characteristic of the computer age. However, this did not originate with computers. It has always been the case with revolutions in daily life. Those who see the revolution taking place are unlikely ever to forget it. Those who see only the effects of the revolution often don’t fully recognize and appreciate it. I call examples of this phenomenon “extraordinary ordinary things.” For me, the most undervalued extraordinary ordinary thing is the elevator.

If you live in a city, you of course are familiar with elevators. They are those non-descript, unexciting devices that take you up and down in tall buildings. But have you ever considered that without elevators, cities as we know them today simply would not exist?

How can you convince people to live and work higher than three or four stories without something to carry them up and down? Think of London, think of New York, and think of Hong Kong. Think of virtually any city in the world. Now imagine what they would look like if no buildings were taller than four stories. Unimaginable!

In short, few inventions have so transformed the way we live more than the elevator.

Now that we’ve recognized how elevators have fundamentally shaped the modern world, it’s interesting to note how they were invented, how they have developed, and where they might go from here (other than just up and down).

What Is an Elevator?

By definition, an elevator (called a “lift” in Britain) is a platform or enclosure raised and lowered in a vertical shaft to transport people and freight. The shaft contains the operating equipment: motor, cables, and accessories. But as we have just seen, this dry, mundane description belies the elevator’s ineffable importance.

The idea of a mechanical system for raising and lowering people and freight is ancient. Primitive elevators were in use as early as the 3rd century B.C.E., powered by humans, animals, or water wheels. In 1743, workers built a counter-weighted, human-powered elevator  inside the Palace of Versailles. It connected the apartment of  King Louis XV of France to the apartment one floor above, which housed his mistress Madame de Chateauroux.

Mechanically operated elevators began making their appearance in the 19th century. They were used to raise and lower people and equipment in factories, mines, and warehouses. These industrial elevators were usually powered by steam engines.

In 1846,  William Armstrong introduced England to the hydraulic elevator (hydraulic crane), which began to replace the steam-powered elevator by the 1870s. A heavy piston moving within a cylinder raised and lowered the enclosure. However, Armstrong’s  elevators were extremely limited in terms of height.

The history of powered elevators in the United States began in 1850. A crude device using a hoisting rope moved freight between two adjacent floors in a New York City building. In 1853, inventor Elisha Otis demonstrated  how a safety brake feature could stop an elevator from falling if the hoisting rope broke. This marked the appearance of what we would consider to be the modern elevator.

The combination of cabling, rather than a piston, plus the safety brake made possible the use of elevators (and the public’s confidence in them) in higher and higher buildings.

In 1857, the Otis Elevator Company began manufacturing passenger elevators.  A five-story, Manhattan department store owned by E.W. Haughtwhat & Company was home to the first installed passenger elevator.  The skyscraper had been born—and with it the modern city.

According to a song in Rogers & Hammerstein’s musical comedy “Oklahoma” (set in 1907):

Everything’s up to date in Kansas City,

They went an’ built a skyscraper seven stories high,

About as high as a building ‘orta grow.

Well, not quite. Today, the tallest building in the world is the Bringing Burj Khalifa Tower in Dubai, rising 160 stories (828 meters or 2,716 feet) into the sky. That truly is about as high as a building ought to grow.

Whenever I check into a high-rise hotel, I specify a room no higher than two levels above the ground floor so that in case of fire I could jump without risking certain death. But what about riding up 10, 20, 30, 40, 50 floors in a high-speed express elevator? And in particular, the risk the elevator may break loose and plunge all the way to the bottom?

Well, here I have much less concern. Although news outlets tend to use it when an elevator malfunctions, the word “plunges” (suggesting free-fall) is probably over dramatic. Elevators have several hoisting ropes that hold up the elevator car, so if one fails the others are more than able to carry the weight.

I experienced such a “plunging” incident when I was a student at UCLA. I stepped into an elevator on the fifth floor of the Engineering Building. When the doors closed, the elevator car began sliding downwards. It went very slowly, but I was afraid it would suddenly accelerate. It didn’t, because the redundant hoisting ropes and other safety mechanisms wouldn’t allow it to do so. However I didn’t know this at the time, so naturally I gave a hefty sigh of relief when the car safely stopped at the ground floor and I was able to step out, mentally shaken but physically unhurt.

I am certain the elevator industry cringes whenever it sees the word “plunge” in headlines about such an incident. To my understanding, the likelihood of an elevator car ever plunging (going into free-fall) is virtually zero.

Elevators got along without the aid of computer technology for well over a century, sort of. As high-rise buildings became ever higher, problems that had been only minor nuisances in lower buildings became major problems in higher ones.

Higher buildings require banks of elevators rather than only one. The problem was how to move increasing numbers of people up and down with a minimum number of elevators to save on costs. And how to move them such that they were not aware of waiting times between pressing the call button and arrival of the elevator car, and the time necessary to reach the desired floor of the building once the passenger stepped in.

These and other functions of modern elevators in modern buildings today are increasingly under computer control, whose functions are becoming increasingly more sophisticated.

For example, in one configuration, the building’s lobby acts like a railway station. Rather than simply pressing up or down (to underground floors), waiting people enter a request for a specific floor. The computer then takes into consideration the location and the demands on all the elevators cars and tells the passenger which one will get him or her to their destination most quickly.

Let’s take a glimpse into the future. You have probably heard of the so-called “space elevator.” Although conceived on the same basic principles as terrestrial elevators, the proposed space elevator is so far removed from earth-bound elevators it warrants a separate category. Vehicles would travel along a cable from the Earth’s surface directly into space, without the use of large, expensive rockets. One practical application would be to provision the International Space Station in orbit +400 km above the Earth’s surface.

According to NASA, which is seriously studying the possibility:

A space elevator is essentially a long cable extending from our planet’s surface into space with its center of mass at geostationary Earth orbit, 35,786 km in altitude. Electromagnetic vehicles traveling along the cable could serve as a mass transportation system for moving people, payloads, and power between Earth and space.

Current plans call for a base tower approximately 50 km tall—the cable would be tethered to the top. To keep the cable structure from tumbling to Earth, it would be attached to a large counterbalance mass beyond geostationary orbit, perhaps an asteroid moved into place for that purpose.

The system requires the center of mass to be in geostationary orbit. The cable is basically in orbit around the Earth.

Four to six “elevator tracks” would extend up the sides of the tower and cable structure going to platforms at different levels. These tracks would allow electromagnetic vehicles to travel at speeds reaching thousands of kilometers per hour.

Conceptual designs place the tower construction at an equatorial site. The extreme height of the lower tower section makes it vulnerable to high winds. An equatorial location is ideal for a tower of such enormous height because the area is practically devoid of hurricanes and tornadoes and it aligns properly with geostationary orbits (which are directly overhead).

While the idea of a space elevator is radical, it is not new. The concept of a tower reaching geosynchronous orbit was first proposed by Russian aeronautics theoretician Konstantin Tsiolkovsky in 1895. Not surprisingly, the concept of a space elevator has figured in numerous works of science fiction.  Premier scientific fiction authors such as Brian Aldis, Arthur C. Clark, Robert Heinlein, and Terry Pratchett, among others have all explored this theme.

Without computers a space elevator would be completely impossible. The cable from ground base to the spacial counterweight is 35,786 km and would not be uniform as you ascend. The equations for finding the right tensile strength and keeping the whole structure in an orbit so that the cable does not bend are dauntingly complex. Only a supercomputer could solve them in a reasonable amount of time.

Readers who wish to know more about space elevators will find a plethora of information at http://spaceelevator.com.

At least one entrepreneur is already contemplating a “lunar elevator.” The purpose would be to facilitate commercial operations on the Moon, such as lunar mining, without requiring spaceships to land on Earth’s satellite some 384,402 km (238,856 miles) away.