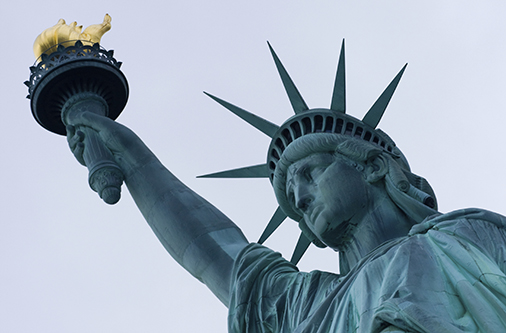 Many people in the Western world believe Internet freedom equals freedom of social and political life. The more access we get, the more freedom and democracy we will have. But, there is little to support this Western meme. Internet access during the Arab Spring may have fanned the flames of rebellion, but it did not lead to democracy. In fact, it may be the opposite—the Internet may have the potential to destroy democracy.

Popular broadcast media in the West reinforce the belief that Twitter and Facebook posts facilitated the Arab Spring, but in reality, the rebellion was caused by inflationary food prices [1]. Malcom Gladwell created an online firestorm when he argued that social networks, in general, have little to do with instigation of political change [2]. Instead, social media eats its own dog food, reinforcing online sentiment that more Internet equals more freedom. This Western meme is so deeply ingrained that we don’t want to consider any other alternative.

The Internet may spread discontentment faster, but it does not create the discontentment. In fact, the Arab Spring—and the Internet—have yet to deliver a democratic society anywhere in the Middle East. Furthermore, The fall of the Soviet Union in 1989–1991 produced increasingly more autocratic rule in Russia at the same time the Internet swallowed the planet. It is difficult to find a government anywhere that is more democratic because of the rise of the Internet, and yet we observe the rise of many autocratic states as more and more people register for Facebook and Twitter logins.

What Was the Question?

This apparent paradox raises a number of questions. The first is, “Why doesn’t open Internet and social networks free people from autocratic rule?” The answer may lie in the speed of Internet deployment. Francis Fukuyama argues democracy fails to unfurl without effective bureaucratic institutions that keep up with social and political change [3]. Most fledgling democracies in the Middle East lack these institutions. They tried putting the Internet horse before the institutional cart. This led to chaos, instead of democracy.

What are these bureaucratic institutions? Ferguson suggests six “killer apps” and associated bureaucracies as the source of Western power and democratic rule: competition, science, property, medicine, consumerism, and the almighty work ethic [4]. None of Ferguson’s killer apps depend directly on democracy, but they benefit greatly from it. But there are also autocratic societies that employed Ferguson’s six killer apps, without the benefit of democracy.

The Internet gives everyone a greater voice and brings greater transparency and accountability, but this can backfire, according to Fukuyama. “The idea that greater transparency and accountability is a necessary path to better bureaucracy flies in the face of a great deal of history, in which relatively clean, modern bureaucracies have been built under nondemocratic circumstances;” he cites China, Prussia, and modern Japan as examples [3].

The second question is even more penetrating, “Is it possible that the Internet will contribute to the fall of existing democracies?” If too-fast deployment of the Internet causes chaos in countries without institutions, might it cause the collapse of democracies that fail to adapt to the “Internet Age?” Will too much “Internet transparency” crush liberal democracies? Again, Fukuyama advises failure of democratic societies to adapt to change often leads to collapse of existing democratic societies. Many South American countries illustrate this effect. Fukuyama references a modified Buchanan-Tullock curve to make his point [5]. The horizontal axis of the Buchanan-Tullock curve is degree of consensus-driven decision-making: Dictatorship is on the extreme left, and “everyone has a say” is on the right. The vertical axis is labeled, “Difficulty of making a decision.” The curve starts near zero and rises exponentially as more people weigh in. In other words, “too many cooks ruin the stew.”

The Internet may be a megaphone allowing everyone to weigh in on every possible decision. And because hardly anyone agrees with anyone else, megaphone voices can lead to gridlock. The U.S. Congress may be an example of this openness. The Internet gives voice to the “tyranny of the masses.” And without strong institutions to push back, this form of tyranny often wins. We had 200 years of legalized slavery under democratic rule as proof of this misstep.

Add to this the disturbing fact that sentiment within online social network communities can be easily manipulated. The figure above shows how homophily—birds of a feather stick together—spreads sentiment throughout a social network. In this example, sentiment in the 4,039-actor Facebook network containing 88,230 links is easily manipulated by fixing the opinion of two key actors: one that we mark as “RED” and another than we mark as “BLUE.” Which nodes have the power to cause others to turn RED or BLUE? The answer is: Six key nodes in the Facebook network have the power to sway entire communities within the social network. The largest community is shown with RED sentiment and a much smaller community is shown with BLUE sentiment in the figure.

A key actor is a node with a large number of links, large number of paths through it, or a blocking node that is essential to holding the network together. Specifically, removal of a blocking node segments the social network into isolated “constellations,” as shown by the RED versus BLUE clusters in the figure. The 4,039-actor Facebook network contains six key nodes, of which five are blocking nodes. They define the boundary between isolated communities or constellations that constitute a “herd.”

To determine the effect of a RED or BLUE sentiment on an entire network, we start by fixing one key node to RED, and another to BLUE. All other actors take on one of two states: RED or BLUE, with probability equal to the fraction of neighbors with RED or BLUE sentiment [7]. Homophily means actors are more likely to agree with the majority of their neighbors. Therefore, repeated application of “painting” nodes either RED or BLUE simulates the social consequences of homophily. As RED and BLUE sentiment spreads, transitions between RED and BLUE eventually stabilize and level off, leaving one community RED and the other BLUE. In addition to identifying herds or constellations, the simple RED/BLUE homophily simulation illustrates how and why sentiment can be manipulated by key actors.

More importantly, this sentiment is largely determined by the structure of the social network, rather than freelance thinking. We have the rise of Nazi Germany as an example of herd mentality. Even though the RED/BLUE homophily algorithm is simple and stochastic, it deterministically identifies communities within larger social networks that take on the same sentiment because of network structure.

Host societies may be endangered by an Internet that spreads faster than society can develop institutions to deal with the social and political change wrought by a strongly connected globe. If Internet power becomes so great that sentiment can be manipulated by knowing the structure of vast social networks, then democracies themselves may be endangered. Free-thinking people may be deluding themselves into believing the Western meme they know to be true, is in fact, a side effect of network topology. Like all other major technological advances, the Internet has the potential for both good and bad—if only we can tell the difference.

[3] Fukuyama, F. Political Order and Political Decay: From the Industrial Revolution to the Globalization of Democracy. Farrar, Straus & Giroux, 2014, 658.