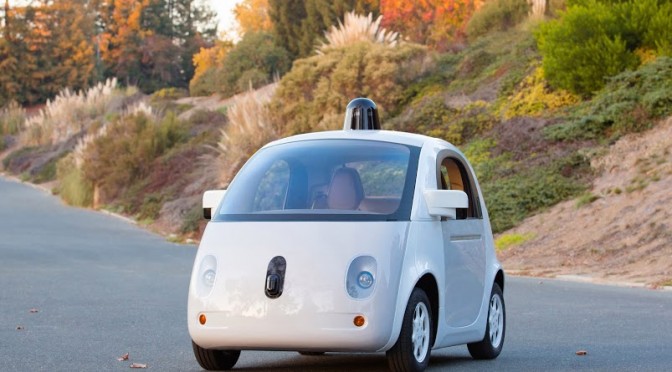 It was my privilege in the late 1990s to manage the DaimlerChrysler Research NA lab devoted to telematics—the study of Internet-ready, GPS-informed cars and trucks [1]. The past 15 years has witnessed the dawning age of self-driving cars —robotic vehicles on the open roadways. Back then the vision was limited—uploading GPS-tracking data from millions of automobiles could potentially lead to greater safety and convenience for their human payloads. For example, big data processing of these traces could identify traffic jams, location of approaching stop signs and signals, as well as improve maps. This information gave drivers superior situational awareness. Nobody at the lab thought about replacing the driver with a computer.

As it turned out, GPS is only one of many sensor systems to give an automobile super powers. Laser range finders, sonar detectors, and cameras have subsequently been added to the list. Moreover, computing power increases of 1,000 times over the past 15-20 years have made it possible to process this rich dataset in real time.

Computational telematics combines sensor and computer so that your automobile knows more about its surroundings than you do. Google’s driver-less car, for example, can identify people, road signs, road conditions, traffic signs and signals, bicyclists, and other cars. Its artificial intelligence software makes decisions by aggregating big data in real time [2].

The Google car has limitations—it doesn’t work so well in rain and snow, and it only understands pre‐recorded roads to be traveled. Parking lots are off‐limits, and the cars must slow down to cross intersections. (Communicating cars may overcome this obstacle. Traversing a four-way intersection is akin to the two-phase locking algorithm used in database software.) Google is busy recording 3-D images of major roads and freeways, thus making them “self-driving car ready.” The task is enormous given the U.S. has 4 million miles of roadway. On the other hand, why not crowd-­source the task as the OpenRoadMaps community has done?

Luxury brands such as Mercedes-Benz and Infinity currently sell semi­autonomous vehicles at level 2. For example, a 2015 Mercedes‐Benz equipped with sensing cameras and processing software can navigate freeways in “hands-free mode” by following well-marked lanes, and avoiding collisions with cars ahead and behind them. This technology is trickling down to other brands simply because it radically reduces accidents.

Will these machines take over? Most brands have promised level 3 cars by 2020, but I think there are several unresolved issues that make that date optimistic. Here is but a sampling of concerns.

Robotic vehicles raise the age‐old questions of computational correctness and completeness. Is the software correct? We know the answer: Turing correctness is un‐decidable. Is it complete, e.g., does it handle all possible combinations and permutations of inputs? Again, we can’t be sure. Even exhaustive testing is unlikely to uncover bugs in the algorithms. Would you turn control of a car traveling 70-mph over to a dozen million lines of code?

While a handful of states have passed laws allowing self-driving cars on the road, most states have not. And the reason may go beyond politics. For example, who is responsible for accidents—the driver of a driver‐less car or the manufacturer? The artificial intelligence software that decides whether to steer right or left simply tells the car to stop, if it cannot make a decision. But sudden stops can create a chain reaction of rear-end collisions. Furthermore, who is responsible for ethical decisions, such as the decision to avoid hitting a bicyclist versus school bus full of children?

Even more insidious is the privacy issue raised by smart cars that know more than your honor student. Google cars record all the places, people, and incidents surrounding them as they travel. Aggregation of this data is capable of reconstructing the activities of an entire nation. Do you feel safe sleeping at night while your driverless car is uploading your day’s travels from your garage to Google headquarters?